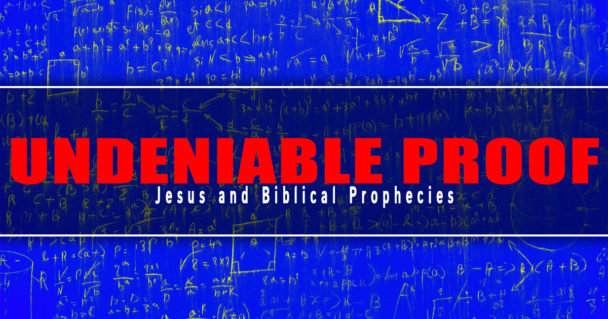 Listener Question: Can you please give me links or some list that I can learn about the outrageous 10 to the [157th power] that you claim regarding prophesy. You stated in a previous podcast that you were only using like 45 measurable ones even though you believe there are nearly 200. I am just interested.

If Jesus fulfilled the prophecies, then He is indeed Christ.

Also, this would prove that the prophecies are from God.

The question is: Could ANYONE have fulfilled these prophecies?

The odds of any one person fulfilling all eight of these prophecies: 1 in 1028

Including everyone that has lived SINCE these prophecies to present day, the odds are better: 1 in 1017, but still next to impossible.

“If you mark one of ten tickets, and place all of the tickets in a hat, and thoroughly stir them, and then ask a blindfolded man to draw one, his chance of getting the right ticket is one in ten. Suppose that we take 1017 silver dollars and lay them on the face of Texas. They will cover all of the state two feet deep. Now mark one of these silver dollars and stir the whole mass thoroughly, all over the state. Blindfold a man and tell him that he can travel as far s he wishes, but he must pick up one silver dollar and say that this is the right one. What chance would he have of getting the right one? Just the same chance that the prophets would have had of writing these eight prophecies and having them all come true in any one man…”

Are we punished for our parents’ sins?