The Plagues of Exodus 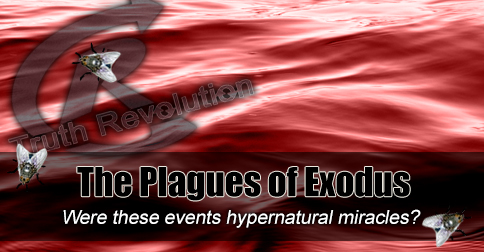 Were the plagues mentioned in Exodus hypernatural miracles?

We did a 30-minute show on this topic!

Dave: The Plagues of Exodus…

Jeff: Were they hypernatural miracles?

Dave: Scholars have suggested that the blood in the Nile River could actually have been a toxic red algae.

Jeff: Scientifically, the putrid environment of the Nile had caused a cause-and-effect reaction that brought frogs.

Dave: Gnats would follow to feed on the frogs.

Dave: The death of the livestock could have been from a virus

Jeff: Which was transmitted by the insects!

Dave: The human’s boils would also be caused by fly bites!

Jeff: Does this mean that God didn’t do anything?

Dave: NOT AT ALL! In fact, Moses still correctly predicted the time and location of those events!

Jeff: AH! You see, it’s why we call it a hypernatural MIRACLE and not bad environmental luck for the Egyptians. God caused it, directly when, where, and how He said He would.

Dave: This is especially true for the plagues near the end – like the dead of the firstborn.

Jeff: Hypernatural miracles are the combination of scientific explanations and a Spiritual understanding of God’s interaction with mankind.