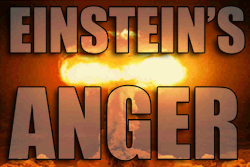 How would YOU feel if a group of people misquoted you to support a belief that you don’t share?

[audio:http://www.truthrevolution.tv/show/TS-0234.mp3]
No Flash Support? Use this Audio Player!

Dave: Well, you’ve heard the atheists. They point out that even Einstein didn’t believe in God. And, if Einstein said it…

Jeff: Wait a minute. Einstein (also) said: “In view of such harmony in the cosmos which I, with my limited human mind, am able to recognize, there are yet people who say there is no God. But what really makes me angry is that they quote me for support of such views.”*

Dave: HE WAS ANGRY that people suggested he was an atheist! Did you hear that?

Jeff: Yeah. He even made an even more blatant statement that should remove all doubt.

Jeff: Pretty clear. If you’d like to argue for atheism, that’s fine. But please don’t enlist Albert Einstein to argue on your behalf. I don’t think he’d like that. Check out the Anthropic Principal. This is why Einstein said there must be a god.

← The Uniqueness of Jesus
Is There Life Out There? →