Of Chimps and Man pt2 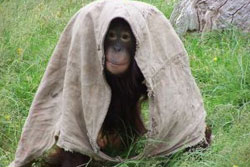 Does the fact that Humans share 99% of our DNA with Chimps explain away Intelligent Design?
[audio:http://www.truthrevolution.tv/show/TS-0131.mp3]

Dave: Jeff, you are very much like a great ape.

Dave: I bet! But, what I mean is that human DNA and chimp DNA is as much as
99% similar!

Jeff: Does this cause problems for Christians?

Dave: No, actually we’re not sure why any Bible readers are surprised by this.

Jeff: At the very beginning – in Genesis 2:7 we read that Adam was formed from
dust of the ground.

Dave: And in Genesis 2:19 we read that animals were also formed out of the
ground!

Jeff: Biblically, we’re made from the same, “stuff”!

Jeff: It would be a bigger problem for Christians if scientists found out that
humans and animals were composed of fundamentally different substances,
because that’s not what the Bible says.

Jeff: You’re not saying anything that the Bible doesn’t already say!

← Of Chimps and Man
Is Christianity Intolerant? →