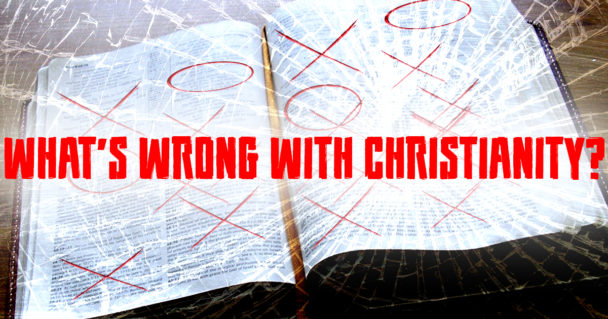 You CAN love Jesus and bacon at the same time!
article: 10 Reasons Christianity is Wrong
It is Absurd: When someone comes to us with an extravagant claim the most common reason we may discount the claim is because, to put it curtly, we find it absurd. The reason why the majority of people don’t believe in Scientology, reincarnation, Mormonism, Greek Gods, etc. is not because they have extensively researched the historicity and veracity of the claims, it is because they don’t believe such things happen in the world. In other words, common sense tells us that when someone claims the absurd almost anything is more likely to be the case (i.e. they are lying, they are delusional, they are relying on misinformation) than for the absurdity to be real. Men do not miraculously heal the sick, raise the dead, cure the blind, and rise from the grave. The claims of Christianity are prima facie absurd. The burden of proof is on them.

Jesus Has Not Returned: For 2000 years–80 generations–a substantial number of every single generation of Christians has whole-heartedly believed that Jesus’ return was imminent. This often included exact dates that, when they came to pass, did not cause the believers to toss their erroneous ideologies aside. And this perennial incorrectness goes back to the beginning. One can only understand the earliest Christians–the generation immediately following Jesus’ death–as a group who were expecting Jesus to return at any moment (I Thess 4:15-17). Why did they believe this? Because, on more than one occasion, Jesus unequivocally said so (Mark 9:1, Matthew 26:64, Mark 13:30). Christians have proven to be resolutely imperturbable and incorrigible to their continued failures.

God Doesn’t Care: Most people believe in God. And, when asked why they believe in God, the most common answer is taken from the argument from design: the universe is too ordered and beautiful to have arisen without an intelligence behind it. Whether or not this is true, this claim has little to do with Christianity. Christianity claims that God not only created the world but also takes an active part in its management, in our moral choices, and in our fates. In other words; He cares. It is this conception of God that bends credulity to the breaking point. God as essence–that is a “first cause” God or a “higher power” God–is a far less difficult concept than God as being. First of all, according to centuries old Christian dogma, God is immutable. In other words He is a static, non-changing “being” that cannot create new beliefs, make inferences, or adjust desires. Secondly the idea of an omniscient, omnipotent “being” having desires borders on the nonsensical. If all things are known–all that ever was, is, or will be–what would be the point of desiring anything? This is not just a simple word game. Christians consistently claim that God “wants” us to believe in him and follow his commandments. However, they also claim that he knows whether we will do so or not. So, what is the point of Him wanting anything? A God as essence is palatable. A God as being is not only ridiculous but likely impossible. (P.S. This one is for the non-predestinarians. If you are a predestinarian there are other reasons you are wrong: see below. However, most Christians are not predestinarians; although, if they care about consistency [not high on the list], they should be.)

Other Religions: For most of Christian history the problems caused by other religions were not pressing, if they were considered at all. In the enclosed world of medieval times–when most people would never travel more than 10 miles from their place of birth–people of non-Christian faiths seemed almost phantasms. However, in the modern world the pots have been poured together and the faiths now intermingle on a daily basis. This, of course, brings religious problems to the forefront. But it also should force Christians (and other faiths) to make a few realizations: first, that faiths are conveyed primarily genealogically–from parents to children–as opposed to through dialectical, later-life conversion. We can never reasonably expect everyone to become Christian. This is not because Christianity is right or wrong, but because faiths carry their own momentum that is not derived from the truth or falsity of the beliefs. Secondly, that people of other faiths can live saintly lives of intense moral rectitude that rivals any Christian saint. And third, that people are exceptionally good at perpetuating, believing in, and dying for faiths that are manifestly false (as Christians believe). In other words, as Christians must unhesitatingly accept, people are very good at making up fantastic stories about events and figures in the past and then believing in them with fervor. If Christianity was the only belief system in the world that made extravagant claims, and if its claims resembled none others in the world, then we would have more reason to believe it to be true. However, this is obviously not so. In fact, often the claims of Christianity are hopelessly derivative. Healing and resurrecting god-men have been the objects of stories for millennia (these god-men were particularly common in the Hellenized world of post-Maccabean Palestine. i.e. Apollonius of Tyana). Also, in addition to sharing many strong features with Mithraism and Zoroastrianism, many early Christians found much distaste with the idea of the virgin birth, finding it too pagan. Plutarch writes in Convivial Disputations,”The fact of the intercourse of a male god with a mortal woman is conceded by all.”

There is No Soul: The inexcusable flippancy of the term “soul” abounds. And, although most people believe in it and freely use the term, they have no idea what it means. The evidence for physicalism–that the mind is the brain–has become nothing less than overwhelming. This evidence exists not only in the highest levels of research–where scientists can now point to, and manipulate, the exact location in our grey matter where essential characteristics lie–but it exists in the everyday lives of millions of people who take psychotropic drugs on a daily basis. These users will tell you drugs such as Prozac, lithium, Paxil and Ritalin don’t just give them a slight pick-me-up, they make them an entirely different person. Some of them must wonder if their “soul” is depressed or happy, anxiety filled or laid-back. Only by ignoring 200 years of medical progress can we believe that we simply inhabit our bodies–dropping by on the way to something better. It isn’t “I have a brain,” it’s “I am a brain.”

Are all things possible through God?

READ: 10 Reasons Why Christianity is Wrong by Trevor Burrus

Listen to The Soul (What is it and Why Does it Matter?) w/ Special Guest, Dr. J.P. Moreland