Invasion of the “Nones”
A Sign in the Sky 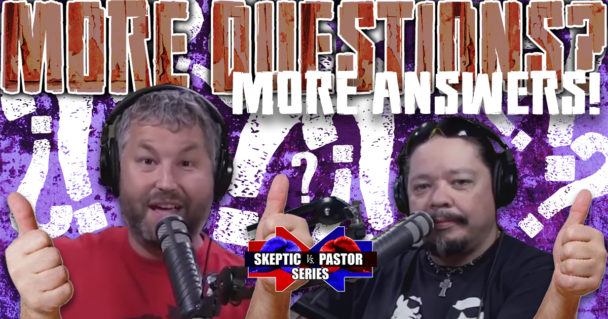 Why do we encourage people to ask questions?

Question 1) Do you believe hell is an appropriate and/or justifiable punishment for a simple lack of belief? If that punishment is never-ending (per Jesus in Matthew 25:46), do you still believe it justifiable?

Question 2) Using only the Bible, can you make a moral case against rape? Or against slavery? And can you do so without disregarding substantial passages found in the Old Testament that discuss property rights of fathers over their daughters and the rights of slave owners over slaves?

Question 3) Would you sacrifice your beloved child if god asked you to?

Question 4) If today, a devote group of Christian men were to enter a neighboring town and slaughter all who lived there because it was reported that the residents were largely populated by those who didn’t worship the Christian God, would that be justified? What if those Christians believed God had commanded them to do so? And what if God’s command included that women, children and infants be slaughtered by the sword? Since such events are recorded in the Old Testament, is it accurate to describe the God of the Old Testament as loving, merciful and good? Is it possible that such written accounts were man-made justifications to overtake another tribe?

Question 5) Would you kill babies or children for God if you believed Yahweh asked you to do so? Since such instances are written in the Bible, is it possible that others have murdered their children because “God told them to do so”, and in fact, God actually did tell them to? If you don’t believe God would do that today, why not?