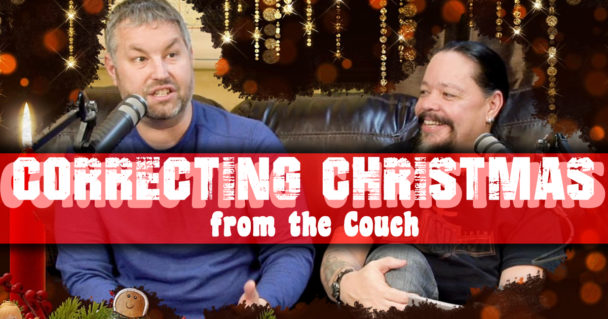 Myth #1 We are taught that Mary and Joseph arrived at an inn, but it was full so they had to stay in stable.
This is probably not true.

Why?:
The word translated “inn” is does not mean “hotel”… the Greek word is kataluma (kat-al’- oo-mah).
Used in: Luke 22:11, and Mark 14:14 – The Upper Room
Luke 22:11 – “and say to the owner of the house, “The Teacher asks: Where is the guest room, where I may eat the Passover with my disciples?”
Where’s the word “inn”? IT IS NOT THERE.. The word is “guest room”… or Mary and Joseph actually were looking to stay at a “guest room’!!
Why were they going to Bethlehem? Because of the census – it was required
everyone to go to their HOMETOWN. They probably had relatives if it was their hometown.
Relatives probably had a “guest room” but it was already full
Look at Luke 10:34 – He went to him and bandaged his wounds, pouring on oil and wine. Then he put the man on his own donkey, took him to an inn and took care of him.
Luke 10:34 is an “inn” and he uses the Greek word pandocheion (pan-dokk- i’-on)!!!
IT IS ACTUALLY AN INN!
Mary and Joseph didn’t go to stay at an inn.

Plus, Inns were only on the main roads: Jerusalem to Jericho.
Not near Bethlehem.

Furthermore: Normally used only by Romans and foreigners.
Inns were not used by Jews, especially not used by those with little money.
People wouldn’t stay at an Inn if family were nearby
For a women about to give birth at a hotel when family was nearby would be unthinkable.

Myth #2 Jesus was born on December 25 th
Why?:
Luke 2:8 says, “And there were shepherds living out in the fields nearby, keeping watch over their flocks at night.”
Shepherds only let flocks graze at night during warm seasons. During the cold seasons they grazed and were out during the day.
Christ was probably born in a warm season like summer, not a cold one like winter.
In fact early Christians chose December 25 th because that was the supposed birth of a false god,
during the pagan festival of Rome: feast of goddess Brutus.
People often say things like: Christmas really isn’t about Jesus because it was placed on this day because of the pagan celebration!
Well, yeah. But understand: Early Christians placed Christmas on December 25 as a rival celebration to the false God.
Jesus birth wasn’t really on December 25 th . So what. It’s a celebration of his birth.

Myth #3
Joseph and Mary arrived to Bethlehem late at night.
Bible doesn’t say when.
We drive, but they walked just 10-15 miles a day. They knew how long they would travel.
Furthermore, traveling at night was dangerous.
They probably arrived in the late afternoon.

Myth #4
The innkeeper had no alternative but to put Mary and Joseph in stable at night.
NO STABLES THEN!
Sheep protected in stone walls.
Other animals brought into house at night.
Not a stable, but a family home.

Myth: 5
Mary gave birth to Jesus the night they arrived.
Luke says “while they were there the days were completed”
Joseph probably didn’t travel on the day of the birth.

Myth: 6
Mary was alone in a stable when Jesus was born.
In middle, or lower class home, there were three parts.
A family room, a place for the animals at night, and an extra room partitioned off from the family room (guest room).
The whole family – everyone – was in the same house.

One Response to Correcting Christmas