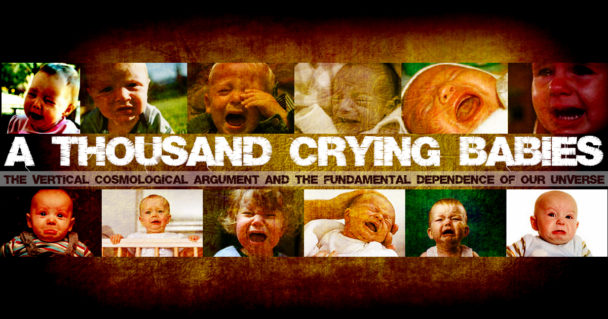 How do we know that God exists?
The Cosmological Argument for the existence for God deals with the Universe.
God didn’t create the Universe and then put up a “Gone Fishing” sign.
Today we are talking about the Vertical Cosmological argument.

What are some things in the Universe that are dependent?

If we put dependent parts together, don’t they become complete and independent together?
The triangle example.
Definitions:

G.I. Joe and Barbie getting married?
A G.I. Joe as a hammer.
A G.I. Joe still has a fundamental attribute regardless of what you use it for.
Everything is dependent, even if you put dependent things together
If you put some dependence in a bucket and add more dependence, you still have dependence.
Our Universe needs something to keep it existing.
This is not a physical need.
Colossians 1:17 – in Him, all things hold together.
Complimentary things are still dependent.
Babies in a forest would need help to survive. If you add a thousand babies, they don’t become NOT dependent, but MORE dependent.

via 1001biblecontradictions.com
Should males appear before God in Jerusalem three times a year? Or not?
Exodus 34:23 vs. John 4:21