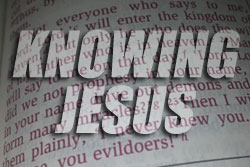 Is Jesus Lord? Or was He a liar or a lunatic?
The main point: Jesus wasn’t JUST a good teacher!

Jeff: CS Lewis came up with something Christians call the Trilemma.

Jeff: Right – and Jesus wasn’t crazy, wasn’t a lunatic – in fact, his teachings are some of the clearest and most helpful words ever shared.

Dave: He sure doesn’t seem to be a liar, there’s no evidence that he was trying to deceive people

Jeff: So, Christians say, he must be LORD – he’s God just like he claimed.

Jeff: Maybe Jesus was a myth… maybe he didn’t actually exist! And we’re going to tackle that in the next Truth Shot.

Dave: Okay, but until then.. the main point of the Trilemma is to help us remember: Jesus wasn’t just a good teacher.

Jeff: Exactly. He was a lot of things, but we can’t say Jesus was a good guy, and leave it at that – if he was real, and he claimed to be God, and he wasn’t crazy… and he wasn’t lying…

Dave: Perhaps he really was the son of God. Just like He said.