Are we ALL atheists? 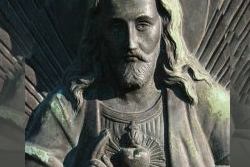 Is atheism a universal belief, as some atheists claim?

[audio:http://www.truthrevolution.tv/show/TS-0187.mp3]
No Flash Support? Use this Audio Player!

Dave: Many atheists or skeptics have mentioned that “we are all atheists about most of the gods that humanity believed in. I just take it one god further than the Christians.”

Jeff: True, in a sense. I don’t believe in Zuess.

Jeff: But seriously, it’s true we don’t believe in all those other gods, but that doesn’t mean there isn’t a real God somewhere. Think about this parable:

Dave: An FBI agent who was trained in spotting counterfeit money would look at thousands of fake bills every day. He always found reasons why the money was fake:

Dave: After may years he said, “I’ve seen so many fakes that I’ve come to realize… a real dollar bill doesn’t exist.”

Jeff: Of course that’s ridiculous. The existence of fakes doesn’t mean there is no real dollar. In fact, thousands of counterfeits should imply that a real dollar actually exists.

Dave: Likewise, the existence of many false gods through human history suggests there may a genuine, original, absolute real God.