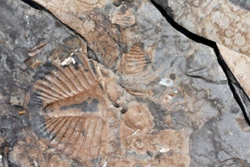 Evolutionary Science has been turned upside down by this one finding.

Dave: A new discovery near China shows, what scientists say, is actually the missing link!

Jeff: The fossil’s jaw looks a lot like those of modern fish, so some say that Placoderms are the ancestors!

Dave: But this discovery actually turned the evolutionary paradigm on its head.

Jeff: Paleontology textbooks showed that cartilage like fish came first, then the bony fish and another branch.

Dave: In 2012 a shark-like fossil was found to be the “transitional” species. Placoderms were just a dead-end in evolutionary terms.

Jeff: But, now, with this discovery at least thirty years of evolutionary evidence has been turned upside down!

Dave: It was said as a fact, “Look – we know how fish evolved. The fossils show it.”

Jeff: Then suddenly, with this one fossil, all that was drawn up has to be redrawn.

Dave: There is a model, however, that doesn’t have to be redrawn.

Jeff: Creation. We who believe that a common designer is more likely than common descent haven’t had to revise anything.

Dave: This doesn’t prove evolution wrong, this is far from the missing link. It’s actually unhinged the history of evolutionary science.