The Intolerance of Christianity
Skeptic vs Pastor – Round 2 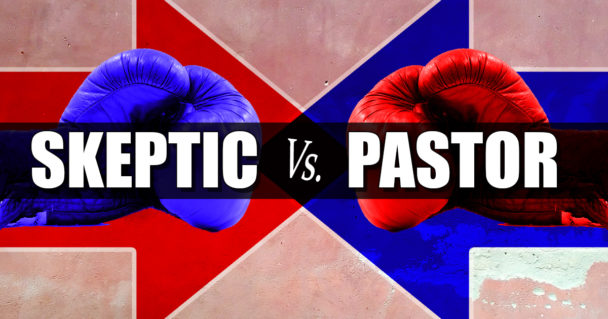 1 – If God is omnipotent (all-powerful), why did he take six days to create everything? Why not speak everything into existence all at once?

3 – If God is so perfect, then why did he create something so imperfect allowing pain, suffering and daily atrocities?

4 – Why did the little old lady that God healed one Sunday need her walker to get around again next Sunday? Was she only temporarily worthy of a healing?

5 – How did Noah fit the millions and millions of species of animals on this planet into his ark? It doesn’t take a mathematical genius to realize the physical impossibility of this.

6 – If Noah did fit all of these species on the ark for forty days and forty nights, how did the penguins make it from Mt. Ararat to the Antarctic? How did the koala bears make it to Australia with no eucalyptus to eat along the way?

7 – Why do innocent children have to suffer with terminal diseases such as cancer? What part of ‘God’s plan’ is this exactly?

8 – How is it that the bible explains the earth to be 6,000 to 8,000 years old when we know that dinosaur bones are at least 65 million years old? This isn’t the only example of our planet’s age by any means, either.

9 – Why can’t the all-powerful God forgive someone of their sins after they die? Example: A Christian man that is seemingly on God’s good list makes a stupid decision and decides to drink a little too much at the fish fry. On his way home he crashes into a mini-van killing a mother, her two children and his self. This man led a very faithful life and made one stupid, yet grave mistake. If this man did not ask for forgiveness of his sins before the electrical activity in his brain ceased, then God will judge him and send him to hell to burn for eternity.

10 – God wants everyone to worship and follow him and, if they don’t, they burn in hell for all eternity. What does this type of attitude say about his character? By definition, he would be described as a tyrant.

11 – If Jesus died on the cross and spent three days in hell to pay for the sins of the world, then why would we have to go to hell ourselves and pay for them again? God is then, in essence, being paid for our sins twice. With that said, was Jesus’ sacrifice not worthy enough? If that is the case, why should we care that he died for our sins if his sacrifice means nothing at all?

12 – If God wants us all to follow and worship him, why didn’t he create us as such? *Your expected answer will be addressed in the next question.

13 – What good is it for us to have free will if the intention is for us not to use it? Sure, we can use our free will, but we will burn in hell for eternity if we do. Russian roulette, anybody? It sounds like a set-up to me.

14 – In the story of Sodom and Gomorrah, why would God kill Lot’s wife, Sarah, by turning her into a pillar of salt for simply looking in the wrong direction? *Warning of impending sarcasm.* God is a merciful God……….. right.

15 – What purpose does hell serve? If it is punishment for sinful actions, shouldn’t it be used for correctional purposes? Seeing as though you burn forever, you will never get out of hell to show that you have learned your lesson. Would it make sense to live a faithful Christian life glorifying the Lord and to accidentally sin by saying a curse word the instant you smash your car into the back of a tractor-trailer, thereby being condemned to burn in hell forever?

16 – We know that we feel physical feelings through electrical impulses that send information to our brains through our nervous system. Once we die, we no longer feel pain due to the lack of a physical nervous system and, oh yeah, a brain. How could we ‘feel’ the excruciating flames of hell for eternity? Does God make you feel this torment for all eternity out of pure malice because you wouldn’t worship him?

17 – If God is perfect and his creations perfect, why did he fail several times? He had to impose suffering upon the human race because Adam and Eve defied him by eating of the fruit from the tree of knowledge of good and evil. Failed! He had to flood the planet 1,600 years later wiping out all but eight humans. Failure! He had to confuse human language after Nimrod and the Tower of Babel incident so that they could not effectively communicate with each other. Failure! How is this a track record of a perfect being?

18 – If God is omnipotent, why does he not just show himself to all of us, all at once, thereby ending this game of free will and temptation?

19 – If, in the beginning, there was only God and he created everything, why would he create angels that had the propensity to defy him? This very fallacy led to Lucifer challenging his authority because he desired to share the same power as God. This led to the rise, or fall depending on how you look at it, of Satan, the most notorious enemy of God and his followers. Failed, again!