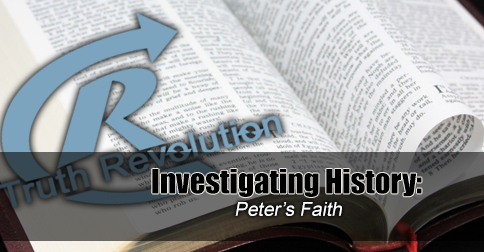 After Jesus’ arrest, Peter denied knowing him. Then, something changed! What was it?

Dave: Peter – Jesus’ lead Apostle. His name meant “ROCK” and he was
POWERFUL!

Dave: True, there was a time when he was… kind of wussing out!

Jeff: After Jesus was arrested Peter denied even knowing Jesus.

Dave: That’s right. Even when a young woman asked him, he lied. And it’s not like
women, in that culture, could actually do much.

Jeff: And after Jesus’ death he locked himself in a room – scared.

Jeff: But that wasn’t the end of the story.

Dave: Right. After Jesus rose from the dead, and appeared to him…

Jeff: And after he received the Holy Spirit…

Dave: Suddenly he was preaching in front of thousands of people.

Jeff: Even doing miracles! And even though he was threatened he did not recant –
he always claimed that he saw Jesus risen from the dead.

Dave: Peter was even crucified upside down for this belief. But he still claimed HE
KNEW Jesus had risen.

← Investigating History:
The Conversion of James
The Gospels: Too Late? →