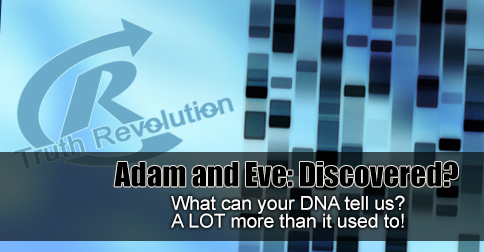 Dave: Were Adam and Eve real people or a parable?

Jeff: Mitochondrial DNA suggests all humanity originated around 150,000 years ago, probably from a single female.

Dave: And Y Chromosomal DNA goes back 50,000 years to a single male.

Jeff: These dates are estimates. Molecular clock analysis is more like a sun-dial than a stop watch. It gets you general time periods.

Jeff: What is striking is how similar it is to what the Bible describes. One man, one woman, with the Garden of Eden being somewhere in the African/Middle Eastern region.

Dave: In fact, sometimes scientists are even referring to this discovery, as the garden of eden.

Jeff: Evolutionists produced a concept called “multiregionalism” to explain how humanity evolved. But, turns out it was wrong. And what used to be seen as a fanciful Biblical legend is backed up with science.

Dave: The dates, the numbers of people, and the location of humanity’s origin all line up between the Bible and science.