One Way!
The Creator and the Cosmos 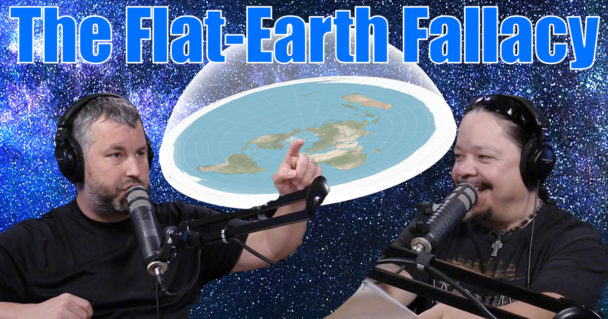 Does the Bible say the Earth is flat?

Discussing an article from Philip Stallings: The Biblical Flat Earth: The Teaching From Scripture

Did Galileo discover the Earth was round

What about Christopher Columbus?

Stallings says, ‘As a Christian, the flat earth begins and ends with Scripture. While the evidence continues to mount, and has, for the flat earth, I must begin by saying, “the Scriptures told you so.” ‘

Stallings says ‘The typical Christian response was to point out that the word circle here is, in fact, proving that the earth was a ball. I remembered even then thinking that didn’t seem right to me. We all know what a circle is and it is not a ball. In fact, the Hebrew word used in this verse is “khoog” (pronounced chug). The word literally means circle’

The people who wrote the Bible, wrote it in their own styles to their own cultures.

The Bible isn’t a science book. If it were, God would make these things VERY clear.

Do these verses claim the Earth is flat?

Of Matthew 4:8, Stallings says, “Notice that this mountain was “very high.” In the Greek here, the word for high is “hupselos” and means literally high or lofty. Add to that the Greek word “very” which is “lian” and we now have a very intentional description of this.

“If the world is a ball, the higher one goes the less one would be seeing of the earth because the curvature would constantly be falling and you would have to look further and further down, however. If the earth were flat, then the higher you go, the more you see while the horizon stays at eye level. The horizon rises to the eye. It seems to me that Jesus was taken to very high mountain and could literally see all of the kingdoms of the world.”

We contend that the verse is figurative in it’s scope of “all the kingdoms of the world”.

The limits of human vision is about 30 miles on the Earth.

Of Joshua 10:13, Stallings says, ‘Another interesting example from Scripture is found in Joshua 10 where God caused the “sun to stand still.

He continues, ‘If the sun is the center of the universe and the earth is orbiting around it, then for this event to occur, it would have to have been the earth standing still, not the sun, however. If the earth is flat and the sun and moon rotate above us, it would make perfect sense for the sun to stand still in order to prolong the day here.” ‘

So, we’re talking about a MIRACLE here, not an explanation that the Earth is flat

What about the firmament described in Genesis 1:6?

Read the article in question for this episode: The Biblical Flat Earth: The Teaching From Scripture