Objections from an Atheist – Pt2
Rewind: The Conflict Over Creation 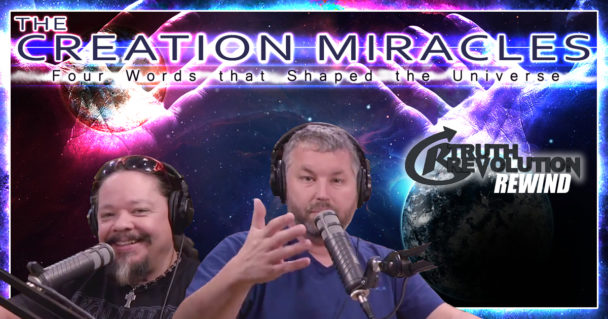 We must be careful about some of the things we say. We must first make sure that we aren’t making Christianity look foolish.

Jeff and Dave both believe in an Old Earth/Universe… around 14 billion years old.

You CANNOT read Genesis and speak meaningfully about age of the Earth without understanding Hebrew language!

Does that Yom sound like just a day? or a period of time?

“evening and morning…” is that literal?

It’s an idiom. Beginning of work, ending of work.
How could there be an “evening” and a “morning” if the sun didn’t exist?

On DAY SEVEN in Genesis God says he is going to rest.
Genesis 2:2

The seventh day doesnt’ describe an evening and a morning. Why?
because He didn’t work… and it was not a description of a 24-hour day but an idiom meaning they started work and ended work during the YOM – time period.

Points to Jesus, real rest! Not about a 24-hour day!
We are talking many thousands of years

The following verses are from New American Standard, because it’s a WORD-FOR-WORD translation.

Bara (baw-raw) – Used only to describe God’s creating. These are “POOF” miracles

Many people are taught that EVERYTHING in the Genesis account is a “poof miracle.”
But those were the only poof miracles.

So what we are going to read is stuff that already existed (God already made it), but he is using things like a recipe, mixing it to make something new…

Haya (haw-yaw) miracles. These are the miracles that really support the Old Earth view.
Haya, in Hebrew, implies that God let nature run its course, not referring to things that exist for the first time. These were not *POOF* miracles.

Then when God makes dry ground appear
New word: qavah – – a verb meaning: “TO WAIT FOR!!”

Was Pangea real? I don’t believe it happened millions of years ago, but I can’t tell if it was real. My pastor says it was, but my family disagrees. Anyone have answers?