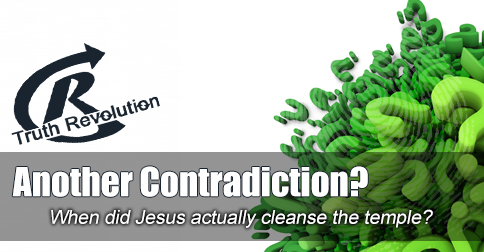 When did Jesus cleanse the temple? Is this really a contradiction?

Dave: When did Jesus cleanse the Temple? In John 2 it seems like it was earlier in his ministry, but in Mark 11 it suggests that it was later on.

Jeff: This reflects a misunderstanding of how the Gospels are written.

Dave: In our CRACKED acronym, the “D” stands for Dialect – what type of genre, vernacular or dialect is being used?

Jeff: For instance, if I say, “We won the football game by a million points!” I’m using hyperbole to make my point.

Dave: So, back to Jesus cleansing the Temple – when did it happen? Remember the dialect…

Jeff: The Gospels are not all written chronologically.

Dave: For us, we expect a story or historical account to start at the beginning, and proceed sequentially. But, that’s not how writers have always inked their pages.

Jeff: John ordered his Gospel by thematic elements. Mark may have ordered his chronologically, although some suggest his was thematic as well.

Dave: So overall the books are thematic. Yet, there is one little clue about when it happened in both Gospels – they both say it was around the Jewish Passover.

Jeff: The same answer from both.