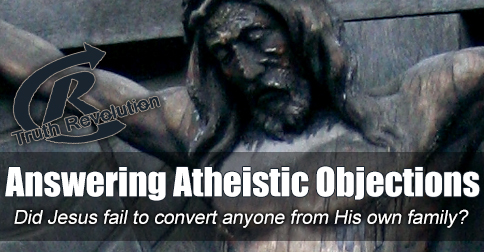 What would it take for your brother to convince you that he was God?

Dave: One skeptic gave reasons to reject Jesus’ divinity. A major point was Jesus’ failure to recruit anyone from his own family.

Jeff: Well, it’s true that at one point Jesus’ family thought he was crazy.

Dave: Mark 3:21 tells us, “When his family heard about this, they went to take charge of him, for they said, ‘He is out of his mind.'”

Dave: The book of James was written by someone, pretty important…

Jeff: Think about what it would take to convince you that your brother or sister was God.

Dave: Uhhh… it would take a lot.

Jeff: No kidding! And it took a lot for James. He initially didn’t believe, but after Jesus’ death and resurrection, he appeared to James (1 Corinthians 15:7) – and that made all the difference for James.

← Another Contradiction?
The Mercy and Justice of God →