Landing on a Comet? 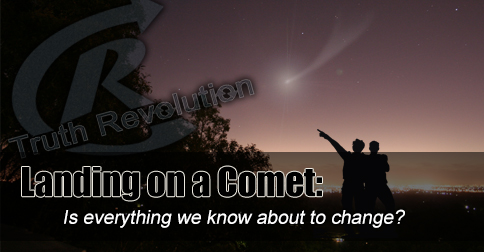 Can the discoveries of the space craft Philea threaten our beliefs?

Dave: The space craft Philea landed on a comet!

Jeff: This is so unbelievable cool, and unprecedented.

Dave: The BBC even reported that organic material was found there!

Jeff: They FOUND LIFE ON THE…

Jeff: Organic material does not mean they found “life” on the comet. Now, it’s a very cool discovery nevertheless, but this doesn’t mean that human beings were seeded by a comet flying by, and God doesn’t exist.

Dave: Organic material is anything carbon-based. Anything.

Jeff: Right. It doesn’t mean alive, it just means there is a carbon molecule somewhere in this thing. Of course, life has to be carbon, thus we call it organic molecules.

Dave: Yay for methane… it’s still is cool, though. We will learn a lot of about the origin of comets, the nature of the solar system, and why Taco Bell’s tacos don’t crunch after they get greasy.

Jeff: I don’t think that last one…

← Your Tithe: Does God Want It?
Our Miraculous Planet →