Investigating History:
The Conversion of James 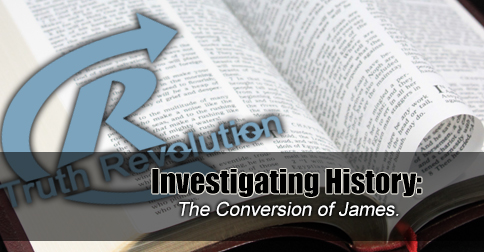 What caused James to go from wondering about Jesus’ sanity to dying for his faith?

Dave: What would you do if your brother claimed to be God?

Jeff: I would laugh. A lot.

Jeff: But James, the brother of Jesus, didn’t laugh – he actually thought Jesus was
crazy.

Dave: Mark 3:21 talks about Jesus: “When his family heard about this, they went
to take charge of him, for they said, ‘He is out of his mind.'”

Jeff: Out of anyone in the world, it would probably be most difficult to convince
your own family that you were Deity.

Dave: But guess what happened to James after Jesus’ resurrection.

Jeff: James saw Jesus (1 Corinthians 15:7). He believed. And he too became a
preacher about Jesus’ life, death, and resurrection!

Dave: Not only did he teach… he died.

Jeff: Eusebius recorded that about the year 62 James was persecuted for his
belief. But he didn’t recant. They took him to the pinnacle of the temple…

Dave: and threw him down. Afterwards they stoned him to death.

Jeff: But he never recanted. Jesus’ own brother believed in Him so strongly that
he died for that belief.

Dave: If that isn’t strong evidence, I don’t know what is.