Is Jesus a Myth? Pt2 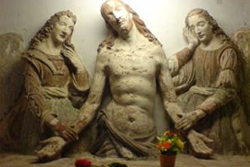 Did Jesus actually exist? Is there actually historic proof?

Dave: Did Jesus actually exist? In our last Truth Shot we pointed out that even Christopher Hitchens, the famous atheist believed so.

Jeff: That’s right, Dave. But he’s not the only one.

Dave: Who else? I mean besides you!

Dave: Not for this!

Jeff: Right! One of them, for instance, was a first century historian named Tacitus. He was born about 55 A.D.

Dave: What did he say about Jesus?

Jeff: Well, he talks about Christus, that’s the Latin name for Christ, who suffered “the extreme penalty” (that would be the crucifixion) of death under Pontius Pilate.

Dave: Which is actually what the Bible described!

Jeff: Yep… he even refers to the belief that Jesus had risen from the dead. Of course he calls it superstition because he wasn’t a Christian, but…

Dave: But, it is good confirmation for Jesus’ existence

Dave: More on this, next time!