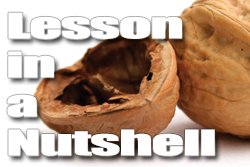 What can we learn from Samson’s disobedience?

Dave: We read an awesome story about Samson in Judges 14:5-6.

Jeff: It says, “Samson went down to Timnah together with his father and mother. As they approached the vineyards of Timnah, suddenly a young lion came [out] roaring toward him. The Spirit of the Lord came upon him in power so that he tore the lion apart with his bare hands as he might have torn a young goat.”

Dave: Nice story, but one problem. Samson was approaching vineyards.

Jeff: But he was a Nazirite – he shouldn’t be drinking wine or grapejuice, or eating raisins or grapes.

Dave: Later, although he wasn’t supposed to touch dead bodies, he finds a dead lion and touches it.

Jeff: Before Samson got really mixed up with Delilah, he was already starting to disobey.

Dave: God had given him a MASSIVE blessing of strength to use for God’s people.

Jeff: But, he was pursuing what he wanted in life and veered further and further away from God’s purpose.

Dave: We don’t usually fall away out of the blue, there are usually small steps on the way. So, try to be careful every day.