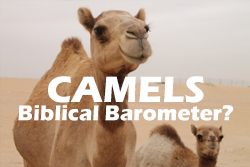 What do camels have to do with proving the Bible wrong?

Dave: The TV Show “Big Bang Theory” as well as National Geographic, and others, have suggested that the Bible is wrong about camels.

Jeff: The claim is that archeological evidence demonstrates that camels appeared in the middle-east much later than Abraham’s time.

Dave: Of course, the Bible describes Abraham as having camels.

Jeff: So, skeptics take this as evidence against the Bible’s reliability.

Dave: Nat Geo even said “This supports earlier studies that have challenged the Bible’s veracity as a historic document” (Feb 10, 2014).

Jeff: But is that the case? First off, we must note that archeological studies cannot prove a negative – they cannot show that camels weren’t present in Abraham’s time.

Dave: Furthermore, Abraham was nomadic. Even if it was true that camels weren’t widespread during those periods it is entirely plausible that Abraham owned some.

Jeff: If Abraham owned a few thousand camels that he picked up during his travels, there would likely be no archeological evidence.

Dave: And the Bible never claims that camels were widespread in the region.

Jeff: Give the Bible a little credit.