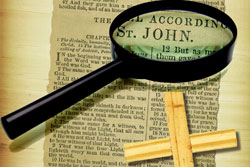 Thallus, a first century secular historian, corroborates events from the Bible.
[audio:http://www.truthrevolution.tv/show/TS-0225.mp3]
No Flash Support? Use this Audio Player!

Dave: Are there any secular historians who confirm what the Bible says?

Jeff: A TON. One of them was named Thallus.

Dave: Thallus is an historian who wrote very close to the time of Jesus’ death and resurrection – sometime around the year 52.

Jeff: We don’t have a ton of his writings, but some quotations are preserved.

Jeff: Yep – he quoted Thallus discussing a very peculiar scene in the life of Jesus.

Dave: It’s interesting because in Matthew 27:45 we read about darkness covering the land during Jesus’ crucifixion.

Jeff: And Thallus corroborates this story!

Dave: So, not only is there secular evidence of Jesus existence, crucifixion, and death –

Jeff: There’s also historical evidence regarding tiny little peculiar details during the crucifixion. Details that testify to the significant impact of Jesus’ death.

Dave: This Biblical claim, while falling short of a “miracle” would easily be a fascinating coincidence for skeptics.

Jeff: This is an excellent demonstration of the honesty of the Bible’s claims.