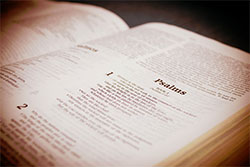 Should the fact that some of the Bible is derived from Oral Tradition lessen it’s impact?
[audio:http://www.truthrevolution.tv/show/TS-0224.mp3]
No Flash Support? Use this Audio Player!

Dave: Some have pointed out that the Bible stories sometimes come from oral tradition.

Jeff: Is that true? Sure! Does that mean the Bible is not accurate? No.

Dave: The concept of their being an oral tradition that turned into a written record is known as “Source Criticism” or “Form Criticism”

Jeff: Now, in themselves it’s kind of a cool thing. They’re trying to figure out how the Biblical writings came to be – what were the sources?

Dave: But, the danger is that we judge something based on our best guesses of where the information came from, rather than on its own merit.

Jeff: For instance, In Luke 4:5-9 Satan takes Jesus up to a high place. The Bible says he shows him “all the Kingdoms of the world”

Dave: But the world is round – it’s impossible to see everything at once!

Jeff: Just read it on its own merits; oral tradition or not we know the writer was using some hyperbole to make his point.

Dave: So, was that an oral tradition? Maybe! But is this a true account? Well, there’s no reason to oppose it!