A Serpent in the Garden? 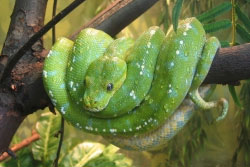 Did Satan take the actual guise of a snake in the Garden of Eden?

[audio:http://www.truthrevolution.tv/show/TS-0191.mp3]
No Flash Support? Use this Audio Player!

Dave: In Genesis 3 we see Satan appearing as a serpent. Was this an actual historic event?

Jeff: Did Satan truly tempt Adam and Eve into sin? Absolutely. Was he really a snake with a physical body and everything? First, let’s look at how else Satan is described:

Dave: In Revelation 12:3 Satan is referred to as, “an enormous red dragon with seven heads and ten horns.”

Jeff: In Revelation 20:2-3 he’s called, “the dragon, that ancient serpent, who is the devil” – obviously the serpent part is referring to Genesis 3.

Dave: In 2 Corinthians 4:4 Satan is even called god!

Jeff: Do we believe he is god? NO!

Dave: Do we think he is actually a multi-headed dragon? Of course not. We know the Bible uses animal imagery to make a point.

Jeff: And snakes, known as forked tongue liars, could have made for a perfect portrayal of how Satan deceived Eve.

Dave: What was the Authors intention in Genesis? To show Satan was a snake? Or to show that Satan is a crafty creature who is out to tempt humanity?

Jeff: More on this in the next Truth Shot!

← The Difficulty of Forgiveness
A Snake in the Garden? #2 →