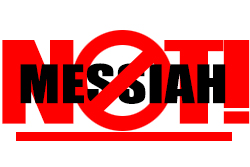 Who was Sabbatai Sevi, and why is his claim to be Messiah so unbelievable?

[audio:http://www.truthrevolution.tv/show/TS-0179.mp3]
No Flash Support? Use this Audio Player!

Dave: Jesus wasn’t the only Messiah.

Jeff: That’s what they say. Sabbatai Sevi was a 17th century Jewish teacher who claimed to be the Messiah!

Dave: A messenger came before him, as predicted.

Jeff: His tomb was empty, shortly after his death.

Dave: And there are miracle stories – once he cursed a church and it sank into the ground.

Jeff: Is this legit?

Jeff: Oh. And though some people claim his tomb was empty… nobody saw him resurrected.

Dave: In fact, Nathan says that Sabbatai is still sleeping.

Jeff: The biggest problem: he was captured by Muslims who forced him upon punishment of death, to say that he was not the Messiah and that people should convert to Islam.

Dave: And… Sevi did what the Muslims requested, denying that he was the messiah and telling people to convert to Islam.

Jeff: That should tell us something.

Jeff: If someone suggests there was another Messiah, make sure to look into all the facts before flipping out.

← Is Jesus the Only Messiah?
Jesus: Creator? or Created? →