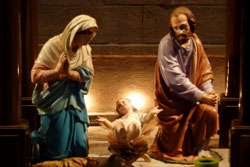 So, early Christians began the tradition of celebrating the birth of Jesus during a Roman Pagan Celebration? Why? Does this diminish the Truth of Christmas?

[audio:http://www.truthrevolution.tv/show/TS-0170.mp3]
No Flash Support? Use this Audio Player!

Jeff: Except that Luke 2:8 says “and there were shepherds living out in the field nearby keeping watch over their flocks at night”

Dave: Shepherds only let flocks graze at night during the warm season

Jeff: Right, but some people say “Christmas isn’t about Jesus, because it’s really a pagan celebration”

Dave: But early Christians used December 25th as a rival celebration, to say we believe our God is better and REAL!

Jeff: So the relevant question isn’t “who celebrated December 25th first?”, the real question is “Who won?”

Dave: Not many people celebrate the birth of another god on December 25th

Jeff: So Christmas was on a pagan holiday and Jesus wasn’t born on December 25th, so what? We celebrate His birth, and we won!