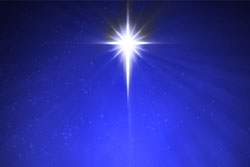 [audio:http://www.truthrevolution.tv/show/TS-0171.mp3]
No Flash Support? Use this Audio Player!

Dave: Four myths in one shot — Myth 1: Joseph and Mary arrived to Bethlehem late at night.

Jeff: Bible doesn’t say when. They walked just 10-15 miles a day. They knew how long they would travel and traveling at night was dangerous.

Dave: They probably arrived in the late afternoon.

Jeff: Myth 2: The innkeeper had no alternative but to put Mary and Joseph in stable at night.

Dave: THERE WERE NOT STABLES THEN, not like we think! Sheep protected in stone walls. Other animals brought into house at night.

Jeff: Not a stable, but a family home. See a previous Truth Shot.

Jeff: Luke says “while they were there the days were completed” Joseph probably didn’t travel on the day of the birth.

Dave: Myth 4: Mary was alone in a stable when Jesus was born.

Jeff: In middle, or lower class home, there were three parts. A family room, a place for the animals at night, and an extra room partitioned off from the family room (guest room).

Dave: The whole family – everyone – was in the same house.

← The Pagan Christmas?
Our Comprehensible Universe →