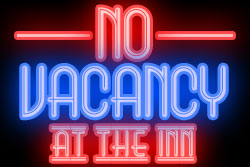 No room at the what? Let’s debunk another Christmas Myth!

[audio:http://www.truthrevolution.tv/show/TS-0169.mp3]
No Flash Support? Use this Audio Player!

Dave: We’re taught that Mary and Joseph arrived at an inn. But it was full, So they had to stay in a stable.

Jeff: Probably not true. The word translated “Inn” does not always mean “Hotel”. For the Last Supper, when Jesus ate in the “Upper Room” or the “Guest Room”, that’s the same Greek word.

Dave: Ah, plus they were going to Bethlehem – their home town. They probably had relatives there.

Dave: In addition, Inns were only on the main roads, Jerusalem to Jericho, not near Bethlehem

Jeff: And normally, hotels were used only by Romans and foreigners. Inns were not used by Jews, especially not those with little money; especially if family was nearby.

Dave: In that day and age, a woman about to give birth at a hotel when family was nearby would be unthinkable

Jeff: So that Christmas Myth is debunked. Joseph and Mary did not try to stay at an inn. It was probably a relatives Guest Room