The Truth About Demons Pt1 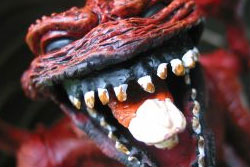 Does Satan and his dominion pose a threat to God?

Dave: It’s time to get a little scary!

Jeff: Let’s go ahead and talk about … demons.

Dave: Is Satan, or are demons, the counterpoint to God? Is it a cosmic battle?

Jeff: Revelation 4:11 says God created all things. That would include Satan and
demons – of course when he created them, they were good.

Dave: But they turned away. So, they are powerful but they aren’t a counterpoint
to God at all!

Jeff: Right, we’re not talking about an even match between Jesus and Satan.
These evil creatures are just… creatures.

Dave: God made them. He can wipe them out with a word.

Jeff: We see this with Jesus driving demons out. They had to obey him, they had
no choice.

Dave: Then why doesn’t God just command them to be good and obey?

Jeff: Apparently God believes in a little thing known as… free will. Even for angelic
and demonic beings.

Dave: There you have folks – demons and Satan were created beings who pose no
threat to God at all!