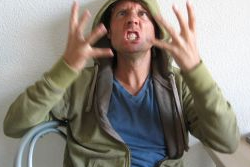 What to do about complaining… it’s in the Bible

Jeff: Let’s read a verse and figure it out!

Dave: Philippians 2:14 says, “Do everything without complaining or arguing.”

Dave: The word (complaining) is from Greek.

Dave: In other words, complaining is when we mutter and grumble from
discontentment.

Jeff: We shouldn’t be muttering and grumbling under our breath – “complaining”
isn’t Christian.

Dave: Right – so we can either confront things head-on like mature adults, or we
just deal with it.

Dave: Arguing with angry conflict isn’t the right kind of debating for Christians to
engage in.

Jeff: We always use gentleness and respect; it’s okay to debate like that!

← The Jesus Dilemma: Was He God?
Hand-Me-Down Religion? →