The Bible and an Expanding Universe 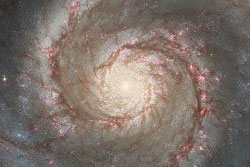 The Bible and an expanding Universe… what’s the correlation?
[audio:http://www.truthrevolution.tv/show/TS-0129.mp3]

Dave: What does the Bible have to do with an expanding universe?

Jeff: Would you believe me if I told you that it was actually taught in the Bible?

Dave: Cosmologists have, since the twentieth century, taught that our universe is
expanding – it keeps spreading out further and further.

Jeff: That’s because in 1929 Edwin Hubble made discoveries that led to this
fantastic conclusion.

Dave: But, what we find interesting is what the Bible said 4,000 years ago…

Dave: He stretches them out!

Dave: There are other interpretations, but commentator Matthew Henry, who
was born in the 1600s, even saw this as a Biblical reason to believe God holds the
stars apart from each other.

Jeff: So before Scientists knew about an expanding universe, people interpreted
Job 9 to mean that the stars were stretched out! Plus, the book of Job was written
around 4,000 years ago!

Dave: Interesting that we didn’t discover an expanding universe until 100 years
ago.