Intolerance: The Elephant in the Room 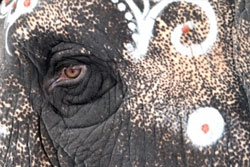 Do all roads lead to God? We believe the claim is false, but isn’t that intolerant?
[audio:http://www.truthrevolution.tv/show/TS-0133.mp3]

Dave: Can one religion know the whole truth about God?

Jeff: Is it arrogant for any religion to claim they know the truth?

Dave: Some people say, “Religions are like blind men feeling an elephant!”

Jeff: “One man feels the trunk and says, ‘ahhh the elephant is long like a giant
snake.'”

Jeff: “A third man feels the tail and says, ‘No it’s very skinny and flimsy.'”

Dave: Problem is to know that blind men are “feeling an elephant” – you’d have to
see the whole elephant yourself!

Jeff: When you say, “Each religion sees some of the truth” you’re basically
claiming that you KNOW THE WHOLE TRUTH!

Dave: How could someone possibly claim that each religion sees a part of the
truth, if they themselves don’t know it?

Jeff: You see, it’s self-refuting. The reality that we can deal with, however, is that some things are true,
and some are false.

Dave: It’s not intolerant to say that some things are wrong. It’s just foolish to
suggest that nobody can know.