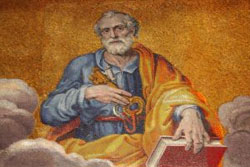 Did Peter really write 2nd Peter? If so, why is the writing style different?
[audio:http://www.truthrevolution.tv/show/TS-0134.mp3]

Dave: Did you know that the book of 2nd Peter was almost excluded from the
Bible?

Jeff: Is this evidence that Christians included or excluded whatever they wanted?

Dave: Maybe! Or, maybe not… first, let’s ask why was the book of 1st Peter
included?

Jeff: Because Peter wrote it.

Dave: He was an apostle.

Jeff: Yep – a known prophet, who was appointed by Jesus and confirmed by
miracles. Such writings were always counted as Scripture!

Dave: But 2nd Peter has a different writing style than 1st Peter.

Jeff: So some people said, “Wait a minute – we’ve been assuming this is from the
prophet, but why is the style different than his other book?”

Dave: Because Christians wanted to be careful not to include anything that wasn’t
written by a true prophet the “pause” button was pushed on 2nd Peter.

Jeff: But, people realized that 1st Peter was written with the help of a scribe, so a
different writing style should be expected.

Dave: With the question of “who wrote 2nd Peter” answered – we can be certain
to include it.

Jeff: Because Peter wrote it!

← Intolerance: The Elephant in the Room
In a Nutshell: Ontological Argument →